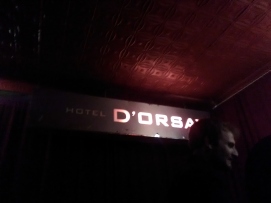 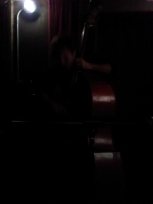 On Sunday evening, I took a train into the Atlantic Terminal in Brooklyn, and then walked the N blocks to a bar called Barbes on 9th Street to see Stephane Wrembel, who is in my opinion, the best gypsy jazz guitar player today. There are many great players out there, most of whom are dexterous, proficient, and skillful, but great jazz guitar playing is not just about technique, it’s about grease, that hidden slick element that makes the same song sound compelling when played by one guitarist and clinical when played by someone else. My phone camera captured these darkblurred images of the room, where I took a front seat before the players. Later, I had Wrembel autograph my copy of Scott Fitzgerald’s latest and last collection, I’d Die for You and Other Lost Stories.  “You want me to sign your book?” Wrembel asked. “He’s dead,” I told him. “But you’re still alive.”